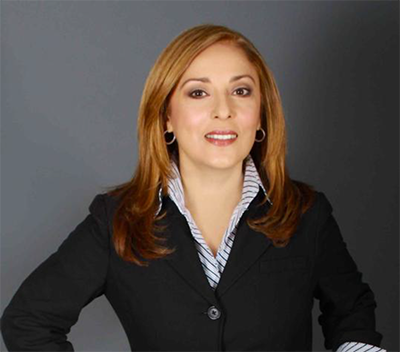 “Our goal is to provide the Spanish-speaking Latino community with the tools and resources to make educated decisions about their finances and become better-informed consumers in these challenging economic times.” – Yamila Constantino

Yamila is a pioneer of financial education for Latinos. She is an award-winning journalist and media executive with two decades of experience in the U.S., Latin America, and Europe. Early in her career, Yamila was the NY Correspondent for Canal de Noticias NBC, a 24-hour Spanish-language news network broadcast in 18 Latin American countries, and worked as a producer, reporter, and anchor for Univision and Telemundo.

She acquired her financial expertise at Bloomberg TV and Radio where she held various positions, including Head of Production for their five European channels broadcast in five different languages, Executive Producer for Bloomberg Spanish-language TV and Radio, and Executive Producer for Bloomberg Networks, which syndicated over 200 daily reports to 700 affiliates from Canada to Argentina. Her command of English, Spanish, and French combined with her solid experience as a producer and journalist, have positioned Yamila as a sought after resource by international media platforms.

Yamila was also commissioned to launch Bloomberg Television Latin America, and anchored a daily live show about U.S and Latin American financial markets. In 1998, she spearheaded the creation of Negocios Bloomberg, the first nationally syndicated radio report to provide personal finance education to the Spanish-speaking audience in the U.S. Negocios Bloomberg won the NY Press Club Award for Best Business Writing, marking the first time it was given to a Spanish-language report.

An honors graduate from New York University and recipient of the Founders Day Award, Yamila is currently a Principal at eContenido, a premier international multimedia production company. She has also been included twice amongst Hispanic magazine’s list of One Hundred Top Latinas in the United States.

She also serves as a CHICA-visor to Meredith Corporation’s Siempre Mujer and Ser Padres magazines, on the Curriculum Advisory Board for the National Financial Educators Council and is a Featured Speaker of the Personal Finance Speakers Association.

DINERO Y MÁS is Yamila’s exclusive platform to address the existing void in Spanish-language personal finance content. Through the creation and distribution of daily financial education reports on how to better manage money and family finances, DINERO Y MÁS supports financial wellness within the Latino segment.