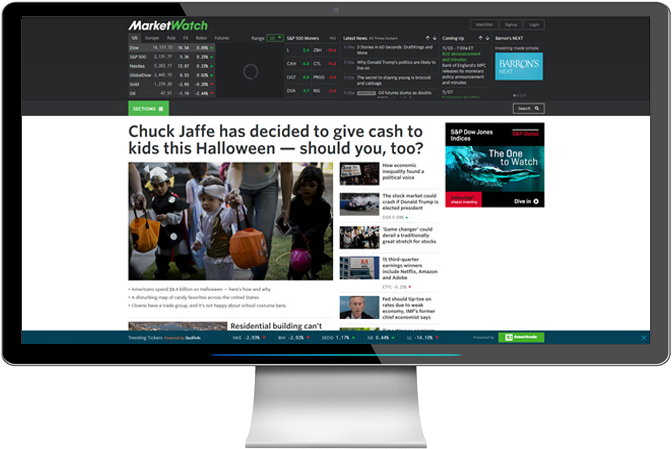 This year the financial education organization National Financial Educators Council suggested an alternative to the typical sugar binge kids go through at Halloween, one that played the dual role of helping children learn about money. The ‘Cash for Candy’ program encouraged parents to buy back their kids’ trick-or-treat candy with cash, and to use the opportunity as a teachable moment to impart personal finance lessons.

Cash for Candy met with mixed feelings. Some parents thought the candy buyback would ruin a child’s fun holiday; others thought it was a good idea, but only if kids were open to it. The NFEC voiced support for implementing the program in creative ways: “Utilize this as a way to open up conversation, but get creative,” suggested Vince Shorb, the NFEC’s CEO. Perhaps none was as creative as the one adopted by Chuck Jaffe, personal finance columnist for MarketWatch and host of the show MoneyLife with Chuck Jaffe. Instead of cash for candy, Jaffe tried out “Cash or candy?” Read the first article here.

Jaffe decided to give trick-or-treaters who came to his door a choice: take candy from one bowl, or pull a small envelope of change from a different bowl. How much money he put in the envelopes varied from one quarter up to one envelope containing “a small jackpot” of $5. The average was about 75 cents – but the kids didn’t know that.

“It may still mark me as ‘the weird guy’ in the neighborhood,” said Jaffe in his pre-Halloween column, “But at least if they make the decision themselves, it might spare me the cleanup from the eggs and toilet paper.”

Turns out the cash option met with far more success than Jaffe expected. Among the 56 youngsters who visited his door, “Fifty took envelopes. Four took candy. Two got there too late, and were hoping the kids just in front of them would take candy so they could get the last envelopes. They wound up disappointed by candy, which one of them noted was ‘kind of weird, because I’m out here trying to get candy.’” Read the 2nd article here – where Jaffe tested the concept and found kids prefer cash over candy.

Jaffe’s experiment provides support for the NFEC program, which points out that, prior to the 1960s, Halloween wasn’t a candy-only holiday. In earlier years it wasn’t uncommon to get a popcorn ball or an apple – or yes, even cash – in your trick-or-treat bag. The NFEC also underscores the widespread financial illiteracy problem in the U.S. Given the important links between financial health and physical/emotional wellbeing, parents should begin teaching kids important money management skills as early as possible.

According to Jaffe, he plans to refine his program for next year, possibly making the choice a little harder for kids by letting them take candy or give him a piece of theirs in exchange for an envelope. At any rate, “Halloween was a blast and ended perfectly,” Jaffe notes in his column after the holiday was over. “No leftover candy, no leftover coin envelopes but without me having to break the bank.”

Jaffe put his Cash or Candy idea to the test and made Halloween more special for kids than ever before. What creative spin will you be inspired to try out next year?

Want to Participate This Halloween?

There are 3 ways you can participate in the Cash for Candy Campaign. The NFEC makes activities easy for parents, treat givers, and organizations. All the resources are provided complimentary.

Want to Participate This Halloween?

There are 3 ways you can participate in the Cash for Candy Campaign. The NFEC makes activities easy for parents, treat givers, and organizations. All the resources are provided complimentary.