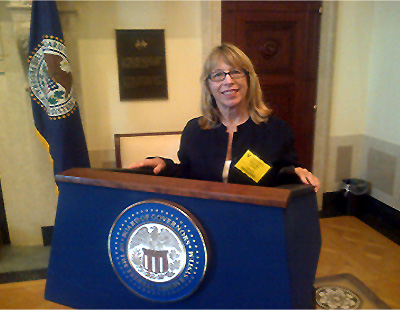 A UCLA graduate with dual majors and minors, Diane Larsen taught the Economic Geography course at Mater Dei High School for a dozen years before accepting the assignment to teach senior Economics, Business Economic Education, and Business Law. She conducts CFEI training, as well as other youth and adult programs, for the NFEC.

Larsen was the only California teacher selected by the Council for Economic Education and the U.S. State Department to travel as an ambassador to South Africa to offer expertise in economic education and financial literacy, teach and review other teachers in an exchange program.

Not only has Diane’s own work been recognized, but her economics students have won the California Stock Market Simulation competition three times – with the latest victory in 2016. Her students have placed in the top 1% medalists’ category and the top 25% national ranking in the Financial Literacy Challenge in 2008 and 2009; her team of four students earned 5th place at the State Economics Challenge in spring 2009. Larsen’s students have won high honors in the California State Stock Market Simulation, winning 1st place in 2008, 2009, and twice in 2012. In 2015 she had trained 5 of the top 10 teams in the state of California. In fall 2010 she entered her classes in the National Stock Simulation; one of her teams reached 1st place in the concluding week. Her teams have been regulars at the CCEE Capital Markets Competition, and one team placed in the top 6 in the Money Wise Teen competition sponsored by the CCEE. In 2016 she took her AP Macroeconomics team to the State Finals of the Economics Challenge, where they earned 3rd place.

In addition to being a UCLA graduate, Diane’s personal achievements include receiving the California State Credential from UCI, an M.A. in Geography from CSUF, and being NYSE and SEC trained. She teaches stock simulations on the state and national levels. Diane has accompanied students on economic educational travel to the U.S.S.R, the new Russian Commonwealth of Independent States, Eastern and Western Europe, Australia, New Zealand, and South Africa.